Using Sass with Compass and a large development team

Sass, the Syntatically Awesome Stylesheets, has been a great help to our user experience team.  We've grown from a one-man PHP shop to a team of 8 with 2 focused on UX.  This growth has forced us to improve our processes.  Two major improvements were the move from subversion to git and from hand-coded CSS to using Sass.  Unfortunately, these improvements did not come easily.

Sass is similar to compiled programming languages in that you write in a different language than the computer executes.  In the case of Sass, that executable format is CSS, where Java would be bytecode and C would be machine language.  However, in Sass, changing a single source file usually results in multiple output files being updated.  And updating 2 source files can update the same output file.  So, source code management can be much more difficult.

We had to choose whether to keep the compiled CSS in git, or to ask each developer to install and run compass.  We decided to keep the compiled CSS in git.  This was for a number of reasons.  Primarily, we wanted to have repeatable code to test from.  I also wanted a simple release process, and to not have to maintain another compiler on production.  Finally, we wanted to keep the developer setup as simple as possible, to reduce cost to new hires and to reduce the number of moving parts.

The Problem - In a NutShell

Here's what would happen; developers A and B would both pull.  They would both make changes to the sass, but not in the same sass files.  Compass would automatically compile the CSS.  Developer A would check in his Sass and his CSS.  Developer B would pull and get conflicts in the CSS.  So, he or she would have to turn off compass, back-out the local changes, re-get (and fight with rebasing) the source, turn compass back on, re-compile, then check-in.  Uuuggghhhh.

This are easy to manage if it happened a few times a month, but it would happen on every checkin.  Not good.

We looked for git fixes.  Carwin Young came up with a workable solution using git - http://carwinyoung.com/2013/01/23/avoiding-git-conflicts-involving-compiled-sass/.  The short directions are:


git add some-sass.scss
git commit -m "A helpful and descriptive message."
git checkout -- compiled-css.css (this one checks out the desired file from HEAD)
git pull --rebase
compass watch / sass watch scss:css / some gui stuff (whatever)
git add compiled-css.css
git commit --amend
git push remote branch
Uuuggghhhh.  This solution is, in my opinion, one of the reasons that people hate git.  Our UX developers don't have the time to become git experts.  Even our software developers won't do this.  Heck, even our SCM dude won't do this.  No disrespect meant for Carwin Young, who is obviously a super-smart guy and went through a lot of work to teach us something useful.

We want a solution where the UX designers can use compass to compile, but everyone else can just get the CSS from git.  We want to have a consistent compilation routine, so that we can have good assurances that the tested code will act the same in production.  Beyond that, we want to be able to test the final release with code that is exactly the same in production.

Also a top priority was ease-of-use.  I don't mind spending some time to get everything set up on the server.  I'd like to keep the workstation setup to a minimum as well, but I didn't mind 10 minutes for each new employee.  However, I want on-going development, test and deployment to be as simple as it was before.


The Solution - A Submodule and a Hook

We decided to store the compiled CSS in a separate git repository.  The UX designers would simply not mount the repo, and instead would use compass to compile the sass to CSS on the fly.  Everyone else would mount that repo on their CSS directory.  That only left two problems:

We use the play framework, which uses a standard layout: 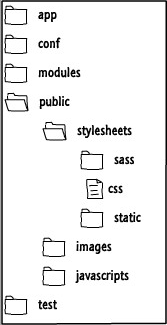 You can see that the css directory, which is under public/stylesheets/css, is a repo, not a normal directory.

With git, you can mount a repo as a "submodule" of another repo.  This allows you to treat the child repo as part of the parent, so stuff like pulls and fetches work transparently.  To do this, we did:

The first command adds it as a submodle.  The next part tells git to always use recursesubmodules when fetching or pulling.  These together give you an almost seamless experience.  This is the only thing you have to run on every workstation.

We setup a hook on the server side.  The purpose of the hook is to perform these actions


We also needed to configure the build environment.  We have 3 important directories: 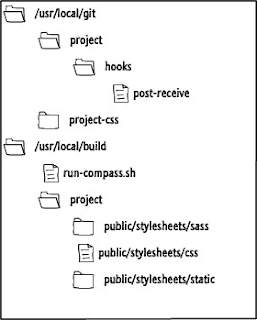 This is the contents of the post-receive hook

All it does is gather the branch and checkin message and then executes run-compass.sh.  Note that it pipes the command to the unix "at" command.  Compass is slow to run and made pushes painfully slow.  I had problems getting git to run in the background until I came upon this hack on stackoverflow.

This is the contents of run-compass.sh

A UX developer makes a change to his or her sass file.  Compass automatically compiles it and reloads the page.  When it all looks good, the developer commits and pushes the change to the develop branch in the project repo.  He or she marks the ticket as done in our bug tracking package.

Other developers pull regularly.  When they do the next pull, it automatically pulls the new sass and the new CSS just like you would expect.  If they hadn't heard me talking about it, they would never know that something fancy is happening.

When we deploy, we pull the latest changes, just like before.  We go through our normal deploy steps just as before with no change to the process.

(This is a little simplified.  We have jenkins doing tests, developers fixing issues from the test, and a ful suite before deployment.  We have a deployment process.  We have bug reviews and code reviews and iteration planning, etc.)

The only changes to the developer, QA and deployment process are that QA has to do an extra pull after merge, and you still have to change the branch in each area.

The submodules are working fine for pulling, but they don't follow when you switch branches.  Maybe I'm missing a setting in .git/config

Work Left to Do

There are race conditions galore when multiple developers check in simultaneously.  Luckily, we're a small team, and it fixes itself on the next check-in.

User management is not working.  In the post-receive hook, I run the compile script as root.  This is a bad idea, but I haven't had time to fix it yet. I would love to have the CSS checked in under the same user as the sass was.

Better error handling.  I have it executing unnecessary commands so that setup is easier.  For instance, I should make it check for an existing local branch.  Also, we just blithely continue on after errors.  I am not an expert bash programmer.